welp....Wandering Thoughts has come to its end - i stopped blogging because i wanted to practice that whole Jesus sentiment of being quick to listen and slow to speak..well I'm over that now ;) and want to start speaking again - so if you want to hear it, I'll be over at michaelkingsley.tumblr.com . Talking about my new life in N. Ireland.
Posted by Mike and Sarah at 4:06 p.m. No comments:

Okay, so tell me what you think.

Here's a list of the books that I keep wanting to read but never have time to as a medic (or should I make that a very slow reading medic).

I'm looking to get advice as to which i should read first, if you've read one and it wasn't that good so I can axe it from the list, or if there's books I REALLY need to add.

In no particular order:

1. The politics of Jesus by John Yoder

2. Amusing Ourselves to Death: Public Discourse in the Age of Show Business by Neil Postman

4. The Cost of Discipleship by Dietrich Bonhoeffer

5. The Selfish Gene by Richard Dawkins

6. Pedagogy of the Oppressed by Paulo Friere

7. Technopoly: the surrender of culture to technology by Neil Postman

8. The Technological Society by Jacques Ellul

Alright those are just the ones that spring to mind again and again, there's others of course that i want to read but these are the ones that seem to stick in my mind. Any suggestions? Thoughts? Help me out here, I'll probably only read one or two by the end of the year (if I'm REALLY doing well that is).

On the train to Rome... well actually to Chuisi - the countryside here is golden yellow and actually quite beautiful. The hill top towns we pass by are really well preserved. (.........) I really loved Siena. I'm so glad we stopped there. Thank God we were able to have that time there. It was so beautiful and not as tourist crazy as Florence. I wish I could have sat at the window of our room looking out onto the street for hours and hours. Towns like that are so romantic and sensual to me. I wonder why... I guess it evokes images from an imaginary past, or maybe because it shows how the city is organic, not centrally/mathematically planned with roads narrowing and winding, merging and diverging. Maybe it's the close proximity of things to each other. Rome will be good I hope but of course it will be a lot more manic than Siena. The world cup should be cool there, though.

Monday 10-07-2006 3:00 p.m. - Rome
So today was it, we went to the Vatican. The lines were long but they went quickly. St. Peter's was enormous. Very Majestic. Almost moved me to awe, but I'm too desensitized to that stuff, that type of art. At the very back behind the altar and above St. Peter's throne, was a piece that did move me to worship, but the rays of light -in gold- seemed a little too dull compared to what's deserving of our God. the line for the Sistine Chapel was even longer. They brought us through so many other rooms and chambers before actually seeing the chapel that you're really tired when you actually get to see it. Saw Raphael's "School of Athens" if I hadn't known it was famous, I probably would have skipped it over like most of the others. The facial expressions + clean style don't move me because they don't feel true to emotion. what did move me were the many pieces of modern art immediately before the sistine chapel but I had to consider the others I was with + how tired we all were/are so we didn't stop to ponder. The sistine chapel was a bit strange. There were so many people there was well as many security guards. Every few moments they would loudly Shhh! us and tell us to be quiet. A warning few took seriously. A very loud announcement came over speakers reminding us of the same + not to use any kind of photography - this warning came in 4 languages and definitively disturbed my peace.

Walking out I see the many street hawkers. They're lucky I guess, at least they have some capital. we passed by some car window washers. They really must have nothing, but they're not begging, wow. I was thinking today, the vatican is not the centre of the church today, if it ever was. Philip Jenkins has observed it right but Christ let us know long before. His kingdom is not of this earth, with palaces, gold + silver, prestigious art, his kingdom turns that on its head. I wonder if Benedict knows that?
Posted by Mike and Sarah at 1:11 a.m. 1 comment:

Who am I to comment on US policy, but I will comment on US news coverage. I've been reading a few articles covering the decision of Barack Obama to overturn the decision that George W. Bush made to ban public funding of embryonic stem cell research. I really don't know what I think about embryonic stem cell research in general, it's a lot more gray I think than some would want to admit, but I also think it's a debate that's a bit past its time as the most promising stem cell research today doesn't come from embryos but from people's own cells. Anyway, that's not my point....

My point is the false dichotomy that reporters seem to be making between Religion and Science. They say that this decision brings science back to the White House.

One such article was by Roger Simon at Politico.com (my favourite american political news source at the moment)


"President Barack Obama did a lot more than lift the ban on federal funding for embryonic stem cell research Monday. He came to the startling conclusion that scientific research should be based on science."

What does the phrase "scientific research should be based on science" mean? Scientific research should of course be scientific, but research is always subject to outside demands. Funding (it needs someone who is interested in the question being studied). Politics (it must be politically seen as advantageous if it's to receive public funding) Ethics (all reputable scientific endeavors must undergo ethical questioning before beginning the project and even attaining grants). Bush (who I can't believe I'm defending) I believe, didn't argue against the liklihood that experimenting with embryonic stem cells, will eventually give rise to effective treatments for terrible illnesses. His argument was (agree or not) that these embryos had human rights and created an ethical issue that would be difficult for many tax payers to see their money going to. (probably a bad argument given that public money already goes to abortive procedures...so perhaps a bit inconsistent). But nonetheless, this was his point. It wasn't an issue of science verses ethics. It's an issue of one groups ethical arguments vs another group's ethical arguments.


Simon also writes:
"Some centuries ago, they didn’t like Galileo saying the Earth revolved around the sun, and they got him to recant (and spend the rest of his life under house arrest). That wasn’t good for science, but it was just fine for the Inquisition."

Again, this is an unfair comparison. The church in this instance was arguing with Galileo's results. That's not happening here. People aren't against embryo testing just because they don't think it would work, and they wouldn't change their views if proven concretely that this is the case. They form their view from ethical values that determine human embryos are human beings. This is a philosophical and theological question, and therefore does not lend itself to exploration through the scientific method (even though certain findings such as: the ability of an embryo to split into twins, or the mapping of the genetic make-up of an embryo, and other chracteristics, can inform the debate, they cannot come up with an answer to the question.)

-Writing this I just heard a commentator on CNN say that "we should consider issues of religion, ethics, politics, but that at the end, science must come first...." what does that even mean? I guess in this sense they just mean the process of discovery. But how can a process, or methodology, of discovery control itself, without things like ethics. Science, itself, is an amoral undertaking. It's how the information discovered is used, or the techniques that one uses for that discovery.

For instance, if the issue was, (as they did in several countries in the 20th century) using those who have learning difficulties or who are prisoners to perform medical experiments on would people say "well, science must come first". The processes were often scientific, and even some knowledge we have about drugs I learn about in medical school comes to us from unethical experiments performed in Nazi Germany (it was a bit surprising finding that out). But obviously we would have ethical concerns, and we would recognise that perhaps there should be some boundaries to scientific endeavours.

It's really easy though to confuse people today. Scientific process cannot comment on ethical issues as such. Science can and must be used to help humanity (this is the basis of all medicine), and the ethical basis for using stem cell research for good. But saying, that science must come first before ethics, is REALLY an unwise statement. It's the type of statement that could cover many wrongs (as it has in the past). 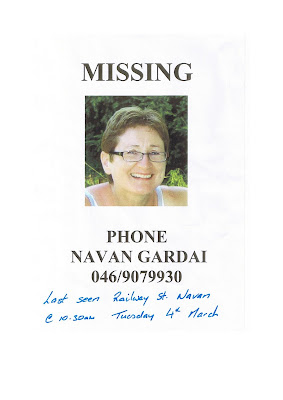 I just wanted to put this up just for a chance in a million. This is a woman who is the wife of a pastor of Elim Church in County Navan. Please pray that she would be found and kept safe.
Posted by Mike and Sarah at 1:25 a.m. No comments:

A few pics from our weekend away in Romsey 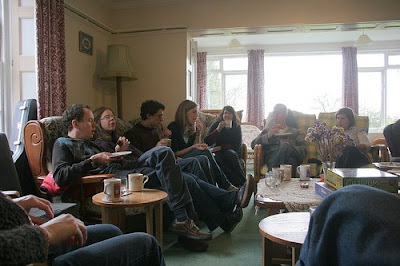 This is pretty much what we did for most of the weekend. And I think that's a good thing. 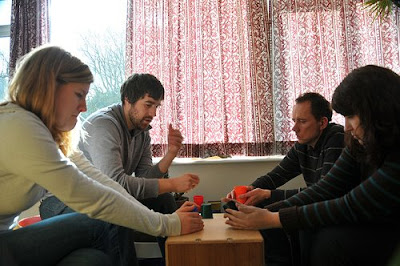 Having another tense match of Perudo...one day I will beat Steve Jones...but not any time soon. 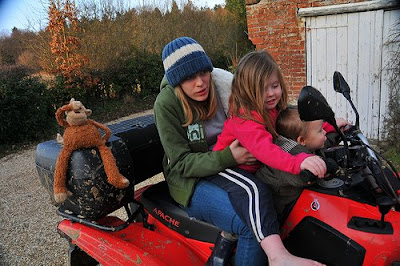 It's great having kids around, that's definitely something you miss about student life. Kids are especially cool though pretending to drive Con's quad bike. 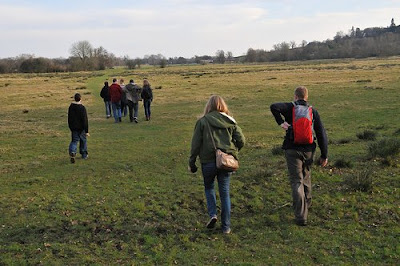 The saturday walk was definitely one of the highlights... 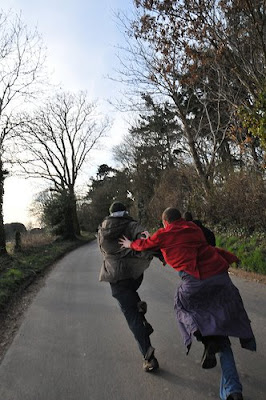 Although there was the occasional local you had to run away from...thanks for the action pic Tom!
Posted by Mike and Sarah at 2:01 a.m. No comments:

Classic Article from the Irish Times. Worth the read.

Mike and Sarah
We're newly married with limited income and facing mounds of debt that need repaying, we're spending this year trying to save as much as we can and live as cheaply as we can, while still enjoying ourselves. It's never boring ;)